One of Canada’s top former diplomats says that Canadians shouldn’t expect to see much more than a statement of principles coming out of an emergency Lima Group meeting on Venezuela that Ottawa is hosting Monday.

“I would expect there would be a declaration asking for movement forward, asking for continued respect for human rights and really putting it on the line that this interim president [Juan Guaido], as per the Venezuelan constitution, should be the one to step up and call for elections,” said Peter Boehm, a long-time senior diplomat with postings to Cuba, Costa Rica and the Organization of American States, in an interview airing Saturday on CBC Radio’s The House.

“This meeting that’s taking place will be significant in terms of putting extra pressure on for a [regime] change.”

Prime Minister Justin Trudeau, meanwhile, has said the goal of the summit will be to find a way to push for “peace, democracy and stability” in the crisis-ravaged country.

Protests have erupted across Venezuela since its authoritarian leader Nicolas Maduro began his second term on Jan. 10. He was elected last year in a controversial election during an economic and humanitarian crisis that has seen three million Venezuelans flee the country.

“I think this ceased being a domestic issue a long time ago,” Boehm told host Chris Hall about Canada’s involvement in mediating the crisis.

“If we respect the rules-based international order, it’s up to us to rally support for change that will hopefully be peaceful.”

At a town hall in Milton, Ont. on Thursday, Trudeau admitted Canada’s goals as a mediator in the crisis are ambitious.

“I make it sound a little easy that on Monday we’re going to figure this out,” Trudeau said, acknowledging that because Maduro has the support and control of the military and judiciary, any solution will “require a difficult process.”

Guaido, Venezuela’s opposition leader, has declared himself interim president. Canada has joined the United States, the European Parliament and several Latin American nations in recognizing Guaido’s claim. Russia and China — both countries which have invested heavily in oil-rich Venezuela — support Maduro, as does Turkey.

Under the country’s 1999 constitution, enacted under Maduro’s predecessor Hugo Chavez, the head of the legislature — in this case, Guaido — can lead a caretaker government in the event of the absence of a lawful one until a new election can be held.

“Venezuela is a country where the government [under Maduro] is not respecting human rights, it’s not respecting its own constitution,” said Boehm, who served as Canada’s point person for the 2018 G7 summit before being appointed to the Senate in October.

Trudeau also brought up the Venezuelan constitution in his town hall comments.

“This all seems very complex and complicated and it is, but it is all grounded in human rights, the rule of law and Venezuela’s own constitution,” Trudeau said.

“This is not about Canada deciding, ‘Oh, we don’t like the way Maduro is governing, therefore we’re going to support an opposition leader to become president.’ 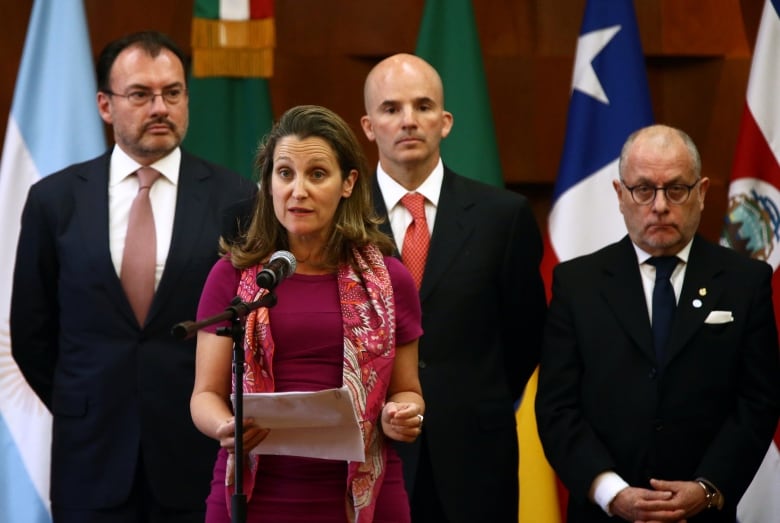 Foreign Minister Chrystia Freeland addresses reporters during a meeting of the Lima Group in Mexico City last May. (Edgard Garrido/Reuters)

As the world watches protesters calling for Maduro’s dismissal, and as Guaido reports that his family has been threatened by the country’s security forces, Trudeau said Canada will not be taking a backseat role.

Indeed, Trudeau said Canada’s has been leading on the issue for two years.

“It’s a complicated situation, but it’s one in which Canada has been leading the way, along with other top South American nations, over the past 18 months to two years.”

The prime minister added he’s spent the past few weeks “making calls to a significant number of global leaders to talk about the situation, because Canada has actually been involved as one of the lead members of the Lima Group.”

Thousands of protesters took to the streets in cities across Venezuela calling on President Nicolas Maduro to step down. This as an increasingly tense battle heats up between two starkly different leaders for control of a country at risk of slipping into total chaos. 1:46

Boehm said it makes sense that Canada is taking a leading role within the international community on Venezuela by hosting the Lima Group meeting.

“This is our backyard, the Western hemisphere. We have a role here too,” he told Hall.

“The significant fact is that Latin American countries have really lined up on this for the first time,” Boehm said. “They’re feeling the impact of three million refugees coming out of Venezuela, spilling into Colombia, Brazil and Guyana.”​

You can listen to the full interview with Boehm on Saturday’s edition of CBC Radio’s The House and in the player below.

The head of Venezuela’s opposition-controlled parliament challenged President Nicolas Maduro on Friday, saying he is ready to assume country’s presidency himself until free and fair elections can be held. Juan Gerardo Guaido Marquez made the announcement […]

(Want to get this briefing by email? Here’s the sign-up.) Good morning. A new strategy for Brexit, the resignation of the Algerian president and a challenge to Turkish election results. Here’s the latest: ImagePrime Minister […]

In the U.S. embargo on Venezuelan oil, Russia is a clear winner – The Washington Post

Please enable cookies on your web browser in order to continue. The new European data protection law requires us to inform you of the following before you use our website: We use cookies and other […]