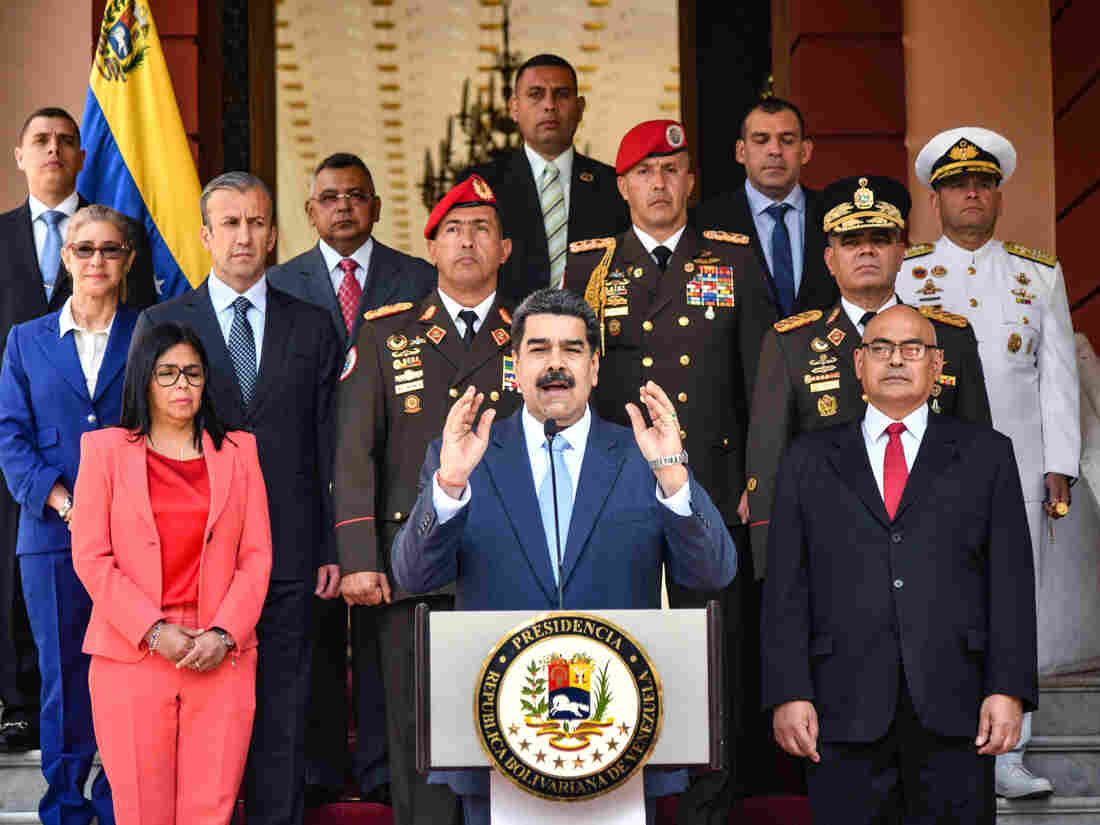 President of Venezuela Nicolás Maduro speaks at Miraflores government palace on March 12, in Caracas, Venezuela. Despite international pressure and attempts to remove him, the leader has clung to power. Carolina Cabral/Getty Images hide caption

It wasn’t long ago that Nicolás Maduro’s days as the Venezuelan president appeared to be numbered.

The authoritarian leader had overseen his country’s worst economic meltdown in history and was facing crippling U.S. sanctions targeting the vital oil industry. Amid chronic food shortages, millions of Venezuelans fled the country.

The United States and more than 50 other nations have recognized opposition leader Juan Guaidó, president of the opposition-controlled National Assembly, as Venezuela’s rightful head of state on the grounds that they believe Maduro rigged the 2018 election.

In January, Guaidó was a guest of honor at President Trump’s State of the Union address. “Here this evening is a very brave man who carries with him the hopes, dreams and aspirations of all Venezuelans,” Trump said of Guaidó, who received standing ovation.

But those hopes and dreams have yet to be fulfilled.

Maduro remains ensconced in the presidential palace and in control of the country. The Venezuelan military has ignored Guaidó’s calls to mutiny and, despite some defections, continues to provide crucial support to Maduro. Anti-government protests have petered out.

Support for Guaidó dropped in polls from more than 60% in February 2019 to 25.5% in May, according to Caracas-based firm Datanalisis. The pollster put Maduro’s May approval rating at about 13%.

The political opposition is divided between moderates who favor negotiations and hard-liners who have promoted military action to oust Maduro.

This more militant strategy backfired in May when a small invasion force of about 60 exiled Venezuelan soldiers as well as two American mercenaries landed on Venezuela’s Caribbean coast near Caracas. They were quickly captured or killed by Venezuelan troops loyal to Maduro.

“So it’s very sad for us. Right now we have a very, very complicated situation,” says Ángel Alvarado, a lawmaker with the opposition Justice First party.

Making matters worse, he says, is that the Maduro government in a legal maneuver last month replaced the leaders of three main opposition parties with politicians friendly to the government. The affected parties include Justice First and Popular Will, which is led by Guaidó and former political prisoner Leopoldo López. Alvarado claims these new party bosses were paid off to switch sides.

All of this has come after years of government attacks on the opposition.

Alvarado says five opposition legislators have been imprisoned on trumped-up charges, including Justice First lawmaker Juan Requesens, who was detained last year in connection with a 2018 assassination attempt on Maduro by a drone armed with explosives. He said that another 20 opposition lawmakers are living in exile while five others have gone underground to avoid arrest.

Geoff Ramsey, who tracks Venezuela for the think tank the Washington Office on Latin America, believes that rather than turning Venezuela into a one-party state, Maduro aims to cripple opposition parties but let them survive.

“It is ultimately useful for the regime to point to the existence of opposition politicians in Venezuela as it allows them to say that they live in a democracy,” Ramsey says.

Aside from the National Assembly, the ruling socialists control every government institution in Venezuela, including the electoral board, which Maduro stacked with his allies last month. But now, the largest opposition parties are leaning toward boycotting this year’s legislative elections because of fears of vote-rigging. 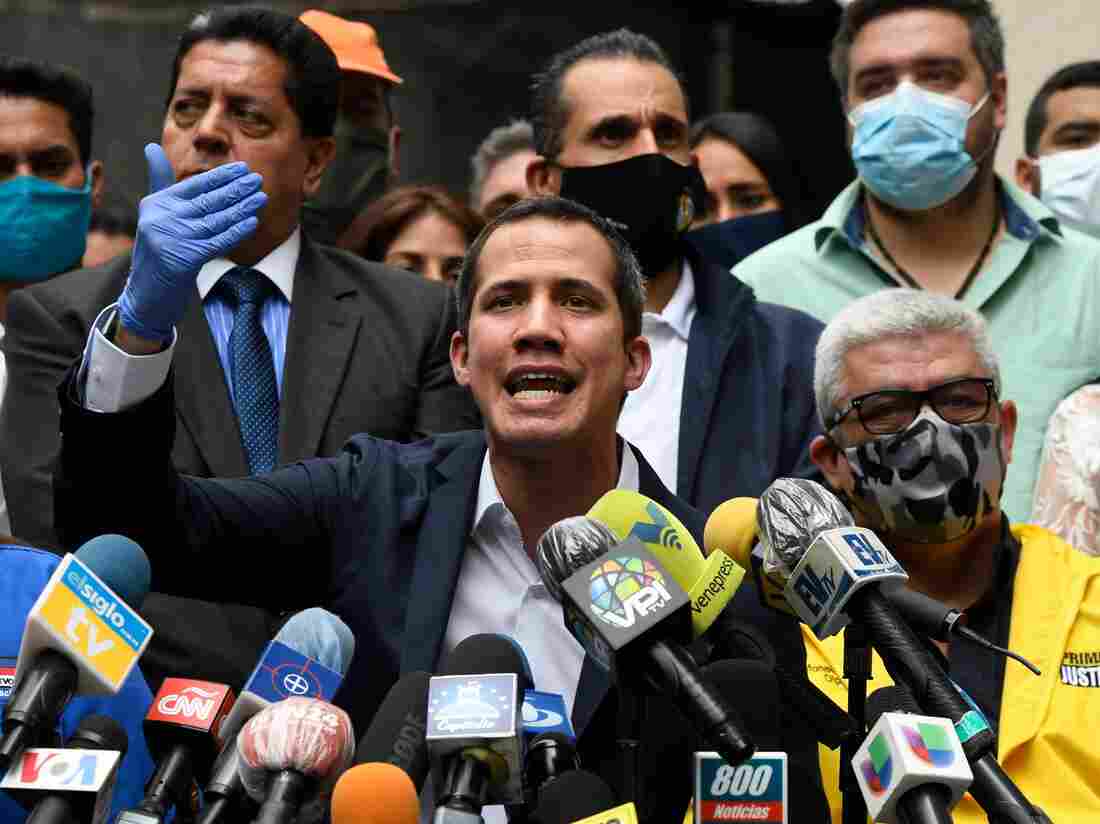 In a conference call hosted last week by the Washington Diplomat newsletter, Carlos Vecchio, Guaidó’s U.S. envoy, noted that the 2018 presidential election, in which Maduro won a six-year term, was marred by irregularities. Referring to the upcoming congressional balloting, he declared: “Will that fake election resolve the Venezuelan problem? No! It will deepen the crisis.”

However, if the opposition boycotts the vote — which under the Constitution must be held by the end of this year — Guaidó will no longer be president of the legislature. He was appointed to that post last year and it is the basis for his claim to be Venezuela’s legitimate head of state.

As a result, Ramsey says, “The international community is going to be at a crossroads where they’ll have to decide whether to continue recognizing Juan Guaidó as interim president of Venezuela.”

Ramsey says the only way out of Venezuela’s crisis is through negotiations to hold free and fair elections. But several rounds of talks hosted by the Norwegian government have failed to produce any breakthroughs.

That has left the opposition so disillusioned that Guaidó’s office released a communiqué questioning the decision of Norwegian envoys to return to Caracas this week to pursue further talks.

Such intransigence by Guaidó’s team could only strengthen the Maduro government, according to Caracas political analyst Dimitris Pantoulas. “Is Norway the enemy?” he tweeted. “It is absolutely amateurish and childish this approach.”

Despite months of bad news, Guaidó put on a brave face and tried to buck up his followers at a public appearance in Caracas last month. He acknowledged they are worn down and frustrated, but he insisted that, one way or another, opposition would outlast Maduro.

“They are not going to defeat us,” Guaidó proclaimed. “We are still here.”