MARACAIBO, Venezuela — Zimbabwe’s collapse under Robert Mugabe. The fall of the Soviet Union. Cuba’s disastrous unraveling in the 1990s.

The crumbling of Venezuela’s economy has now outpaced them all.

Venezuela’s fall is the single largest economic collapse outside of war in at least 45 years, economists say.

“It’s really hard to think of a human tragedy of this scale outside civil war,” said Kenneth Rogoff, an economics professor at Harvard University and former chief economist at the International Monetary Fund. “This will be a touchstone of disastrous policies for decades to come.”

To find similar levels of economic devastation, economists at the I.M.F. pointed to countries that were ripped apart by war, like Libya earlier this decade or Lebanon in the 1970s.

But Venezuela, at one point Latin America’s wealthiest country, has not been shattered by armed conflict. Instead, economists say, the poor governance, corruption and misguided policies of President Nicolás Maduro and his predecessor, Hugo Chávez, have fueled runaway inflation, shuttered businesses and brought the country to its knees. And in recent months, the Trump administration has imposed stiff sanctions to try to cripple it further.

As the country’s economy plummeted, armed gangs took control of entire towns, public services collapsed and the purchasing power of most Venezuelans has been reduced to a couple of kilograms of flour a month.

In markets, butchers hit by regular blackouts jostle to sell decomposing stock by sunset. Former laborers scavenge through garbage piles for leftovers and recyclable plastic. Dejected retailers make dozens of trips to the bank in hopes of depositing several pounds’ worth of bills made worthless by hyperinflation.

Here in Maracaibo, a city of two million on the border with Colombia, nearly all of the butchers in the main market have stopped selling meat cuts in favor of offal and leftovers like fat shavings and cow hooves, the only animal protein many of their customers can still afford.

The crisis has been compounded by American sanctions intended to force Mr. Maduro to cede power to the nation’s opposition leader, Juan Guaidó. The Trump administration’s recent sanctions on Venezuela’s state oil company have made it difficult for the government to sell its main commodity, oil. Together with the American ban on trading Venezuelan bonds, the administration has made it harder for Venezuela to import any goods, including food and medication.

Mr. Maduro blames the widespread hunger and lack of medical supplies on the United States and its opposition allies — but most independent economists say the recession began years before the sanctions, which at most accelerated the collapse.

“We are fighting a savage battle against international sanctions that have made Venezuela lose at least $20 billion in 2018,” Mr. Maduro told supporters in a recent speech. “They are pursuing our bank accounts, our purchases abroad of any products. It’s more than a blockade, it’s persecution.”

Shortages have sunk much of the population in a deepening humanitarian crisis, though a core group of military top brass and high-level officials who remain loyal to Mr. Maduro are able to tap into the remaining resources to survive — or even enrich themselves through illicit means.

To many, it seems each month brings record lows.

Venezuela has the world’s largest proven oil reserves. But its oil output, once Latin America’s largest, has fallen faster in the past year than Iraq’s after the American invasion in 2003, according to data from the Organization of Petroleum Exporting Countries.

Venezuela has lost a tenth of its population in the past two years as people fled, even trekking across mountains, setting off Latin America’s biggest ever refugee crisis.

Venezuela’s hyperinflation, expected to reach 10 million percent this year according to the I.M.F., is on track to become the longest period of runaway price rises since that in the Democratic Republic of Congo in the 1990s.

“This is essentially a total collapse in consumption,” said Sergi Lanau, deputy chief economist at the Institute of International Finance, a financial trade association.

The institute estimates that the drop in Venezuela’s economic output under Mr. Maduro has undergone the steepest decline by any country not at war since at least 1975.

By year’s end, Venezuela’s gross domestic product will have shrunk by 62 percent since the beginning of the recession in 2013, which coincided with Mr. Maduro coming to power, according to the finance institute’s estimates. (Venezuela’s government hasn’t released official macroeconomic statistics since 2014, forcing economists to rely on indicators like imports to estimate economic activity.)

By contrast, the median economic decline in the former Soviet republics was about 30 percent during the peak of the crisis in the mid-1990s, the institute calculates.

For now, the government is concentrating its scarce resources in the capital, Caracas. But the state’s presence is melting in the hinterlands, an absence that has been particularly glaring in Zulia, Venezuela’s most populous state. 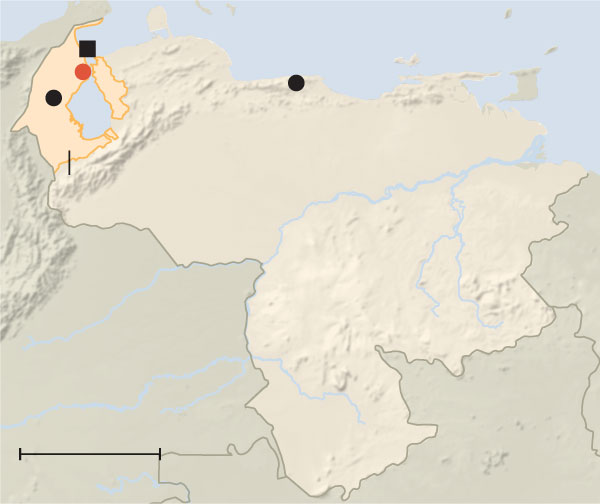 Its capital, Maracaibo, was once Venezuela’s oil powerhouse. A blackout in March plunged the state into a week of darkness and chaos that left about 500 businesses ransacked.

Power has been sporadic ever since, exacerbating longstanding water and gasoline shortages and leaving towns without functional banking systems and cellphone coverage for days on end.

The flea market, a once-bustling maze of stalls from which vendors hawked food and household goods, has become the face of this crisis.

Juan Carlos Valles arrives at his tiny canteen in a corner of the market by 5 a.m. and begins making a broth out of beef bones and frying corn pastries in the darkness. He says his stall has been without power since March, his sales are down 80 percent since last year and each day is a struggle against soldiers who force him to accept nearly worthless low-denomination bills.

Whatever money he makes he immediately invests in more bones and corn flour, because prices go up daily.

“If you take a rest, you lose,” said Mr. Valles, who has run his canteen since 1998. “The money has become worthless. By the time you take it to the bank, you have already lost some of it.”

Real incomes in Venezuela have fallen to levels last seen in the country in 1979, according to the international finance institute, leaving many to survive by collecting firewood, gathering fruit and fetching water in streams.

“The government is talking about solutions in the long and medium term, but the hunger is now,” said Miguel González, the head of the community council at Maracaibo’s Arco Iris shantytown.

He said he lost his job at a hotel when looters ransacked it in March, ripping out even window frames and cable wiring. He now collects wild plums to sell for a few cents in the city’s parks. Most of his community’s diet now consists of wild fruits, fried corn pastries and bone broth, residents said.

Farther from the state capital, conditions are worse.

Toas Island, once a touristic idyll of about 12,000 residents spread over fishing hamlets, has been largely abandoned.

“There’s no local, regional or national government here,” said José Espina, a motorbike taxi driver there. “We’re on our own.”

Electricity and running water are available for only a few hours a day. The boat that provided regular service to the mainland broke down last month. An oil barge lent by the state oil company occasionally tugs a rusty ferry carrying meager supplies of subsidized food — a precarious lifeline for the island’s poorer residents.

Hyperinflation has reduced the island’s entire budget to the equivalent of $400 a month, or just 3 cents per estimated resident, according to the mayor, Hector Nava.

The hospital has no medication and no patients. The last person to be hospitalized died in agony a day later without treatment for her kidney disease, doctors at the hospital said.

As Toas hospital’s beds stand empty, 2-year-old Anailin Nava is wasting away in a nearby hut from malnutrition and treatable muscular paralysis. Her mother, Maibeli Nava, does not have money to take her to Colombia for treatment, she said.

The four stone quarries that are the island’s only industry have been idle since robbers stole all power cables connecting them to the grid last year. Local opposition activists estimate up to a third of the residents have emigrated from the island in the past two years.

“It used to be a paradise,” said Arturo Flores, the local municipality’s security coordinator, who sells a fermented corn drink from a bucket to local fishermen to round up his salary, which is equivalent to $4 a month. “Now, everyone is fleeing.”

On the other side of Zulia state, in the ranching town of Machiques, the economic collapse has decimated the meat and dairy industries that had supplied the country.

Power cuts have idled the local slaughterhouse, once one of the largest in Latin America. Armed gangs extort and rustle cattle from the surviving ranchers.

“You can’t produce if there’s no law,” said Rómulo Romero, a local rancher.

Local shopkeepers have pulled together to repair power lines and keep telecom towers running, to feed public workers, and to procure diesel for backup generators.

“We have practically taken on the functions of the state,” said Juan Carlos Perrota, a butcher who runs Machiques’ chamber of commerce. “We can’t just put a lock on the door and call it quits. We have hope that this will improve.”

MACHURUCUTO, Venezuela – For all the heated talk coming from Washington about President Nicolás Maduro being a Cuban puppet, there was a time when Cuban troops really did try to take control of Venezuela — […]

Venezuelan intelligence agents have detained a senior aide to opposition leader Juan Guaidó after a raid on his Caracas home. Mr Guaidó has demanded the immediate release of his chief of staff Roberto Marrero, whose […]