Maduro blamed the US for attacking the power structure, saying the “imperialist government of the United States ordered this attack,” but offered no proof for the claim.
School and work in the country will be suspended for another 48 hours, Maduro said Monday.
“It isn’t easy,” he said, congratulating the people of Venezuela, and added the country will “recover slowly.” He admitted large parts of the country “aren’t stabilized” and warned “more attacks” could be on the way.
“We are on the right side of history,” he said. “We are on the way to a great victory from the greatest blow ever delivered to Venezuela.”
Meanwhile, Venezuela’s National Assembly approved a request Monday from opposition leader Juan Guaido to respond to the widespread outages with a “national state of emergency.” The decree will allow the National Assembly to seek international cooperation or foreign intervention.
Guaido told CNN’s Patrick Oppmann in a weekend interview this could include military intervention.
US officials say all options are on the table with Venezuela, but military intervention is not likely at this point.
The decree started Monday and will last 30 days, and can be extended an additional 30 days under the vote just taken.
At a press conference Sunday, Guaido said talks have been held with Germany, Japan, Brazil and Colombia to seek their support. Guaido said there is $1.5 billion available from multilateral organizations to take care of services in Venezuela. He did not say where the money was or how the funds could be accessed.
Guaido again appealed to the military to “stop hiding the dictator,” referring to Maduro.

Guaido said Sunday that 16 states continued to be completely without power, while six had partial power. He said the private sector had lost at least $400 million from power outages.
Electricity was cut to 70% of the South American nation late last week, and officials warned that hospitals were at risk. 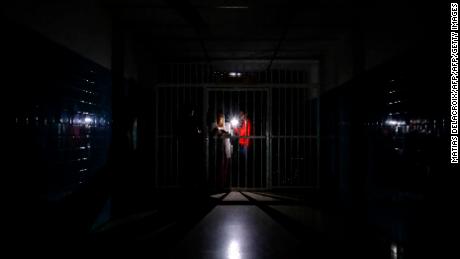 “Venezuela has truly collapsed already,” Guaido told CNN Sunday in an interview in a sweltering hotel room in the Venezuelan capital — another byproduct of the blackouts.
“There is no service in the hospitals. These were the best hospitals in the country. If we are in the capital what is it like kilometers inside Venezuela where there hasn’t been or there has been very little gasoline with periodic cuts in electricity, without basic goods, with inefficient public transportation? You can say with all responsibility that Venezuela has already collapsed.”
Guaido said the opposition had recorded 17 “murders” during the blackout.
“I can’t call it anything else, due to lack of electricity. Imagine if in your country, you wake to the news that there’s been four days without electricity because they steal from electricity plants and 17 people died. That’s murder,” he said. CNN cannot independently confirm the number of dead from power outages that began in Venezuela on Thursday afternoon. 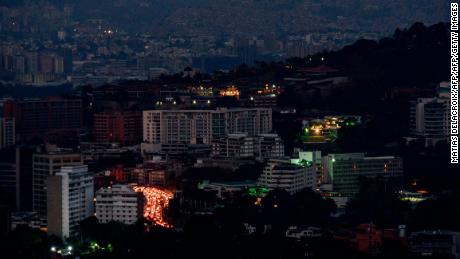 Maduro has blamed the United States for the blackout, telling supporters at a rally Saturday that the nation’s electric grid had been sabotaged. The United States has attributed the outage to the Maduro regime’s “incompetence.”
But Guaido told CNN that the Maduro government’s accusations of a US cyberattack were absurd. Venezuela’s main power plant is full of aging, analog machinery not connected to any network, he said.
“We are in the middle of a catastrophe that is not the result of a hurricane, that is not the result of a tsunami,” Guaido said. “It’s the product of the inefficiency, the incapability, the corruption of a regime that doesn’t care about the lives of Venezuelans.”

Maduro and Guaido held separate and contentious rallies in Caracas on Saturday, with Maduro insisting that the country’s power grid had been “hacked” and “sabotaged.”
Maduro told supporters that almost 70% of power had been restored in the country Friday afternoon, but that progress was put off track by an “international cyberattack” carried out by the “US government” and Venezuela’s opposition.
He announced changes inside Corpoelec, Venezuela’s national electric company. The first step, he said, was to “clean” the company to get rid of “traitors” and “infiltrators.”
Maduro also criticized opposition calls for a military intervention in Venezuela saying that if the US decided to carry out military actions in the country, both pro-opposition and pro-government groups will be affected. 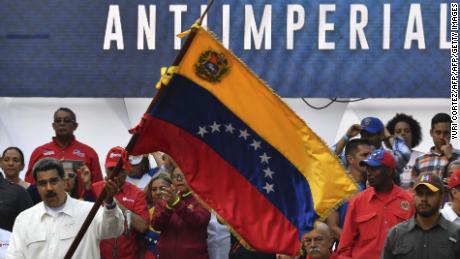 Guaido, at his rally, defiantly assured followers that all options were on the table to get Maduro out of office.
Using a megaphone and standing atop a bridge — after police dismantled the stage he was supposed to use — Guaido said constitutional options to promote regime change would only work if the opposition continued to protest regularly and called on citizens to travel to Caracas to protest.
Guaido also said that Article 187 of the Venezuelan Constitution is under consideration and will be activated “at the appropriate moment.” Article 187 states that the National Assembly has the power to authorize the use of Venezuela military missions abroad or to allow foreign missions in the country.
He asked his supporters to remain strong in the face of the power outage.
“We have been reporting the electrical crisis for years, and now, we have to alert in a responsible manner that this could also become the gasoline crisis, in addition to the water crisis we already have.” 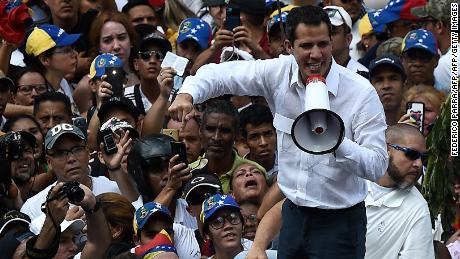 US points finger back at Maduro

On Monday, US Secretary of State Mike Pompeo announced the US will withdraw all remaining personnel from the country’s embassy in Caracas this week.
Last week, Pompeo had rejected Maduro’s finger-pointing, blaming him for the outage situation.
“The power outage and the devastation hurting ordinary Venezuelans is not because of the USA. It’s not because of Colombia. It’s not Ecuador or Brazil, Europe or anywhere else. Power shortages and starvation are the result of the Maduro regime’s incompetence,” Pompeo tweeted.
Pompeo posted a photo of Guaido’s rally with the caption: “The people of #Venezuela have again responded to @jguaido’s call to take to the streets in support of freedom and democracy. Public-sector workers, suffering economic & political repression, now stand with Guaido and the promise of a better future for Venezuela.”
Rampant inflation and food scarcity have gripped Venezuela under Maduro, and thousands have fled to neighboring countries as shortages, political turmoil and crime rates have soared.
Blackouts have become a daily occurrence as the economic crisis has worsened, but one of the magnitude of the ongoing outage — which has paralyzed most of the country — is rare.
Guaidó said the exodus of millions of Venezuelans over the last several years likely meant there were not enough engineers left to help end the blackouts.
“They don’t have the manpower. I doubt they have the capability to completely restore power,” he told CNN Sunday.