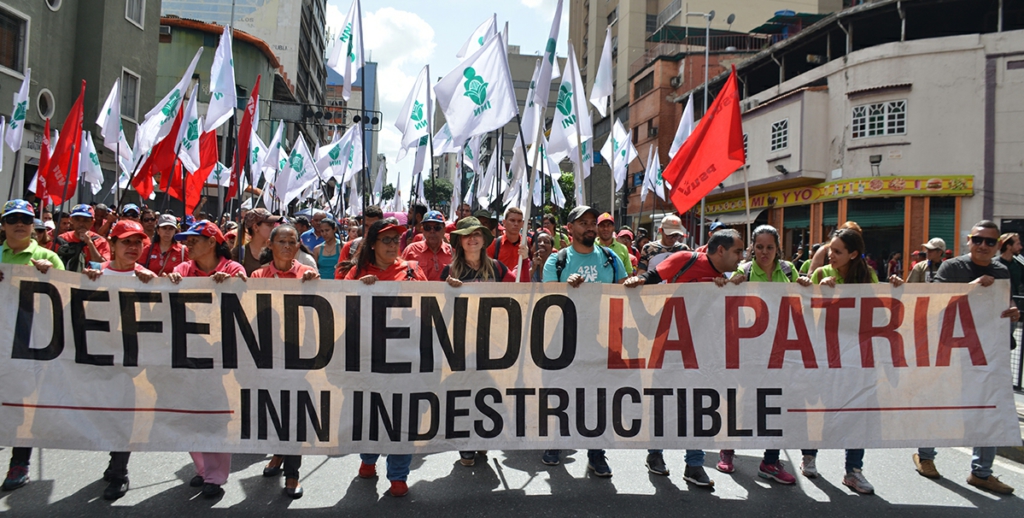 Contingent of the National Institute of Venezuelan Nutrition, in a march in Caracas, July 27, 2019 | Photo: Gloria La Riva, Liberation News

With Trump’s Aug. 6 announcement of a total U.S. economic blockade of Venezuela, President Nicolás Maduro is calling on people worldwide to stand with Venezuela on Saturday, Aug. 10, with solidarity rallies.

Massive marches in Venezuela will be held the same day to denounce the most severe economic attack yet.

By the illegal U.S. executive order, all entities within the United States and worldwide — whether individual, corporate or governmental — are prohibited from engaging in any economic, commercial or financial transactions with the Venezuelan government and any associated individual or entity.

On Aug 6, Vice-president Delcy Rodríguez denounced Trump’s order as “very grave. … He has taken the most dangerous steps against our homeland, establishing the basis for an absolute asphyxiation of Venezuela.”

Earlier this year, the U.S. government seized Venezuela’s CITGO oil properties based in the United States, and tens of billions of dollars in Venezuela’s gold, money, and property worldwide. U.S. imperialism’s goal is the overthrow of Maduro and the Bolivarian Revolution. Washington’s continuous attacks have failed.

Now, the Aug. 6 order codifies and internationalizes a complete ban on any commercial or financial interaction with Venezuela.

There are two exceptions to the order: The U.S. coup puppet Juan Guaidó, who has stolen untold billions of the country’s resources, and Chevron Oil’s operations in Venezuela, permitted for three more months.

The U.S. government and media call it an “embargo,” but “blockade” is the term that best defines the scope: Every entity worldwide is ordered to comply with U.S. imperialism’s dictates. Targeting a people, denying them food or medicine or other means of survival, is genocide and an absolute violation of international law.

For weeks, Washington has been aggressively plotting to cut off all food imports for the essential CLAP food program serving 18 million Venezuelan people. 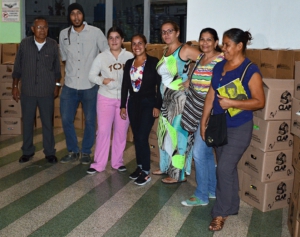 Each month, Venezuelan households receive at their homes a substantial food box containing nonperishable foods. Chicken, meat, eggs and other proteins are also provided in additional deliveries. The people in the neighborhood communes and communal councils are the guarantors of the food delivery.

CLAP was instituted by Maduro in 2015 to overcome the U.S. and Venezuelan elites’ economic war and assure that the most vulnerable people receive food at highly subsidized prices. For instance, in May the CLAP food boxes were costing a nominal price of about 2,800 Bolivares (Bs) versus the estimated 178,000 Bs to purchase the same food in a private market. At that time, roughly 4,000 Bs were equivalent to one U.S. dollar.

In preparation for the blockade, Trump officials have trumpeted a false accusation for weeks, claiming that the Maduro government is “money-laundering” through the CLAP program, and even claiming that the government spends too much money in “no-bid contracts” for the food! All of it is intended to cover up the criminality of the United States government blocking food and medicines.

The blockade’s aim: Starve the people

Yesterday, the first effect of the U.S. blockade was the detaining of a ship in the Panama Canal carrying 25 tons of soy protein destined for Venezuela’s CLAP program. The insurance company guaranteeing the ship was immediately hit by the U.S. sanctions. It instructed the ship to divert to another country.

Blocking massive shipments of food has only one purpose: Starve the people, especially those most vulnerable. 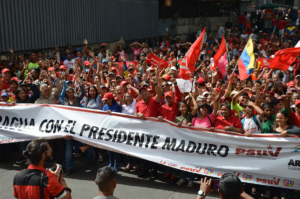 Venezuela’s government and people have heroically resisted the aggression. Much work is underway to reduce dependency on food imports and for domestic agricultural production to grow. Currently, more than 60 percent of the food in CLAP boxes is produced domestically.

It is for this reason that the solidarity and assistance provided by Cuba, Russia, China, Iran, and other countries is so critical. Cuba’s more than 20,000 doctors have provided free, quality health care for years. China and Russia are delivering food and medicines. China, Russia and Iran are helping build major housing projects in Venezuela as part of the 5 million goal of new homes, at a nominal price, for the people. So far more than 2.6 million homes have been constructed.

International bodies like the UN General Assembly and the Non-Aligned Movement have endorsed their support for the legitimate President Nicolás Maduro.

Diosdado Cabello, president of the National Constituent Assembly, expressed the sentiments of the Venezuelan people in the face of U.S. imperialism’s latest aggression: “In its irrational attack against our People, imperialism, in an absolutely absurd and abusive use of power, seeks to intimidate and trample those who do not submit to its designs. Venezuela raises its rebellious and liberating voice. We will triumph!

President Donald Trump will host Brazilian President Jair Bolsonaro in Washington on March 19, the White House announced Friday. They are expected to discuss the turmoil in Venezuela.

Venezuela in crisis: How did the country get here? – Aljazeera.com

Venezuela‘s National Assembly, the opposition-controlled legislative body, declared President Nicolas Maduro a “usurper” last week, deepening the political and humanitarian crisis that has engulfed the country.  The declaration came about a week after Maduro was […]

UN human rights chief Michelle Bachelet is set to arrive in Venezuela on Wednesday for a three-day visit where she is expected to hold separate talks with both President Nicolas Maduro and opposition leader Juan Guaido. […]